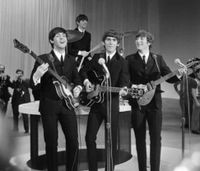 Here is info directly from the Faithful Word Baptist website. Has anyone seen the movie Footloose lately?

The website says the Beatles are God-hating Communist devils, and it would really be best if we only sang songs in church which are 50 years old or more. That way, we know what’s tried and true.

As I’m thinking about it, wouldn’t it be most beneficial to only stick with ideas that are 50 years old or more? Yes, I think so. This way we’ll know what to think ahead of time, why reinvent the wheel? Umm….unless you live in a time period where the wheel hasn’t been invented within the last 50 years….then you couldn’t reinvent the wheel because it wouldn’t be invented because you could only use ideas from the last 50 years…….mmmm…..now I’m getting confused here. I guess I’m thinking too much again.

And only use the King James Version bible, that’s on the website too.

I notice the congregation is 10 months old. Does the 50 year rule only apply to music?
.
A quote from the website:
“Rock n roll music was pioneered by ungodly sinners like Little Richard, a sodomite filthy animal, and Ray Charles, a heroin addict. of rock n roll music is ungodly.”

I am going to give this serious thought before I commit to burning my audio collection. Will some one loan me a wheelbarrow and a can of gasoline?

So where do I stand on music and theology? Short answer: lyric content and the perception of the listener are deciding factors.

We all fall short in our Christian faith. It would not interest me to seperate other people’s sins into categories for judgement. If a style of music is deemed inappropriate by a congregation, then that music style is not appropriate FOR THAT CONGREGATION; this does not make a statement on the inherent qualities of the music. Music does not inherently have a quality, it’s our perception of it that creates the quality. My guideline is: are the lyrics about God, for God or to God; and I would add one more: does the music spiritually feed the congregation or strenghten their walk in Christ.

But I am always open to adjusting my opinion when I have new information to work with. I can’t imagine I would ever say that I have fully defined the nature of the arts in worship. The arts are not static, it must breathe and move – and the same I think with our Christian faith.
*****************

3) Primarily sings songs which are 50 years or older. Worldly music goes in and out of style; but the classic hymns are never out of style. The Christian Contemporary music and southern gospel music of today will not be sung 50 years from now. It will be old hat; but here we are hundreds of years later still singing â€œAmazing Graceâ€, â€œThere is a Fountainâ€, â€œCome Thou Fountâ€, â€œThe Battle Hymn of the Republic.â€ These are songs that have stood the test of time and which God has blessed for decades. New music is not wrong, but must be very carefully examined for the source and the quality. If we were to sing 9 out of 10 songs 50 years or older, the tenth new song should not sound out of place.

2 thoughts on “The Beatles are God-hating Communist devils?”