Recently I’ve been watching quite a few Broadway musicals to see elements that I like and dislike in each. My co-workers have enjoyed very much watching me go into video stores in China and say “Excuse me, where are you musicals?” And everytime they bring me CD’s of Western pop artists. In fact, a local guide has told me there is no way to explain “Broadway musical” to a video shop owner here in China – they don’t understand what it is.

So my friends say “Broadway musicals? Why don’t you ask them where the Barbara Streisand section is?” Yeah, very funny guys. I’ve got a friend back home who says “I hate musicals. They don’t make any sense. I like plays, they’re more real.” Then he asks me, “Do you like musicals?” And my reply is, “I HAVE to like musicals. After all, I’m a musician, I need to work!” But truth is, I love the cheeziness of musicals. I think it’s a kick.

So I spend hours hunting – and most of my finds are the moldy oldies – like “Fiddler on the Roof”. I watched the movie version with Topol as Tevye. This isn’t a scholarly dissection here; just a list of what struck me as good elements. Just as a regular viewer. 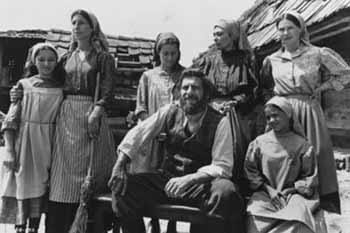 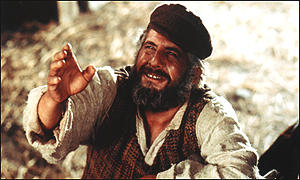 “There is something for everyone in this film,” he purrs. “After 25 years, all married couples will question whether they are still in love.

“Children will always think they know better than their parents.

“And the film is particularly popular with girls in Japan because they identify with the conflicts that can be caused by arranged marriages.”

2 thoughts on “Fiddler on the Roof Character Motives”