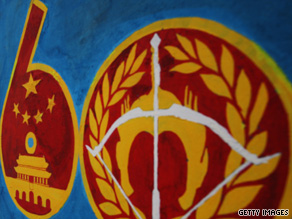 Conrad Askland, from Mount Vernon, WA USA, is currently living in Macau (SAR) China while working with the Cirque Du Soleil ZAIA show at the Venetian Macao. In Asia he has also performed in Shanghai, South Korea and Japan.

Happy Sixty Year Anniversary to the People’s Republic of China!

It’s a four day holiday for the locals here in China. When locals have holidays it usually means that I work more; doing entertainment shows to accommodate the tourists.

China’s last 60 years has been bittersweet with a unified people exposed to both hard living and the largest economic boom in modern history. At the end of my blog post there’s a link to a great CNN article by Jaime FlorCruz that gives an overview of China’s 60 years as The People’s Republic of China.

I have posters of Mao Zhe Dong (Mao Tse Tong) in my Macau apartment. They are reproductions from the originals that call for united workers. I picked these up on a vacation to Beijing that included the typical tourist activities of climbing the Great Wall and visiting Tiananmen Square. Local Chinese and Macau residents that see the posters smile and are suprised I have them. I myself was surprised no one chastised me saying “Why do you have photos of Mao?”.

Mao Zhe Dong is loved and revered overall in China by my experience. I have asked many mainland Chinese what they think of Mao and the most common response is “50-50” or “both good and bad”. My perception is they recognize many problems but also recognize it is part of their history and the country is headed in a new direction. I have never heard a mainland Chinese person speak poorly or critically of Mao in private conversation.

While vacationing in Beijing I met a Chinese college student and she had asked me which locations I was visiting for my vacation. I mentioned Tiananmen Square and she said, “Why would anyone want to go there? It’s SO boring!”. I replied, “Well, you know, because of what happened there?”. She answered, “What happened there?”. She didn’t have any knowledge of the Tiananmen events of June 4, 1989. (You can read about those events here: http://en.wikipedia.org/wiki/Tiananmen_Square_protests_of_1989)

I was surprised by her response that she knew nothing of it and I chose to let the subject go. I’m here in China as a guest to work and in the process want to learn about their culture. I’m not here to project my culture onto theirs.

Recently I received an email from a Canadian friend that said, “China’s great to visit, but I think the US is a whole lot safer, and has a lot more opportunity.” I don’t know if that’s true.

Living in Macau (SAR) China and the strong influence of neighboring Hong Kong; I have the unique experience of being able to visit mainland China and have mainland Chinese friends while also having the progressive thinking and relative autonomy of Macau and Hong Kong residents. Macau and Hong Kong are now “Special Administrative Regions” as part of China. They will officially be integrated totally under China in 2050, but until that time retain local government and infrastructure. So in a way it’s like “China light”. I get to experience Chinese culture from a base that is very Western and comfortable for someone from the US.

What do locals think of the US? To my face people give a thumbs up when they learn I am from the USA. And the first question after that is usually “Do you like Obama?”. When I say “Yes!”, they smile and give a thumbs up.

Although in a Hong Kong taxi I was wearing an Aussie shirt and told him I was Australian when asked my home country. He was from VietNam. Told me about his escape from the country and the evil acts of Mao Zhe Dong’s brother. Then told me that the USA only wants war. “They only know war. It’s all they do.”

Many of the younger generation in China are dreaming of new opportunities and possibilities. Many ask me about how to navigate jobs and how to be an entrepeneur. Many ways of thinking in the West seem to be new to them. Or maybe it’s because of a great change in thinking between the generations. The older generation went through many great difficulties and were very used to fitting in and doing their part as part of a whole. The new generation has only known the great propulsion of the China economy and has heard first hand accounts of many friends who have had success during this opening to business in the West.

These are exciting times for China. Happy 60th Birthday to the People’s Republic of China, and many sincere thanks for letting me learn about your culture and to see first hand the development of your new era.