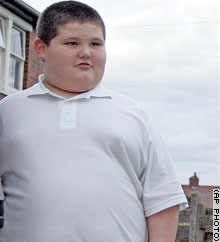 I’ve been writing music for Charlie and the Chocoloate Factory, including a theme song for Augustus Gloop. I ran across this article today about a boy in London who is 8 years old and weighs 200 pounds. His mother says he will only eat junk food and she refuses to stop feeding him.

The English social services there actually reviewed whether he should be taken out of the home. They ruled today that he can stay, which is a good thing for him as it sounds like the food is pretty good.

Gosh darn it all, his mother tries to feed him fruits and vegatables but “he just spits them out.”

Hey, this is the REAL AUGUSTUS GLOOP! Read the Augustus Gloop CNN Article.