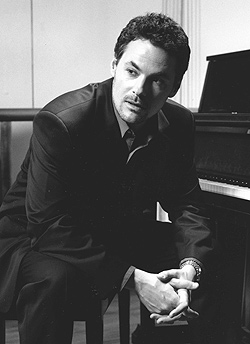 Adam Guettel is the composer and lyricist for “The Light In The Piazza” – a musical, but really worthy of the title “opera”. I’ll tell you first why Piazza and Guettel interest me, and then following will be more biographical info and article links.

I had the chance to see “Piazza” performed live in Seattle in 2006 with seats up front by the conductor. I remember the person at the time whispering in my ear “You’ll be conducting here someday” and that made me feel good in the sort of pompous way that viewers of live performance sit back and say “I could do that” (ok – not as bad as guitar players watching other guitar players in bar bands).

The curtain opened and I was expecting a real snoozer. I don’t like romantic crap and all the posters of “Light in the Piazza” had a guy and girl smiling and in love – barforama. But once the curtain opened and the music started I was once again in for a paradigm shift.

The music was complex and flowing – the lyrics so engaging and the melody lines so flowing and beautiful. I was really floored. I had no idea a composer was still writing this kind of music – deep and thoughtful yet still engaging. This was not the typical I-IV Broadway progressions that everyone is milling out like the old Tin Pan Alley songdays. This was art.

And I was humbled in the hearing of  this performance. As it turns out the person that took me to the performance was friends with one of the lead singers and we talked with them afterwards. They were exhausted from the demands of the score and wanting to head right back to the hotel room. This was their “gig”. To call this a “gig” would be calling Lady Liberty a “statue”. To me they had pulled off a tremendous feat.

I really cannot properly convey how powerful the Light In The Piazza is to me – you’ll just have to see it performed well live. If you like Italian opera and Sondheim – then this is the show for you.

Then I forgot about it. Now fast forward four years later as I am consumed and possessed with orchestration and Broadway musicals. I’m studying Sondheim for lyrics and form, Rimsky Korsakov and Samuel Adler for orchestration, Rodgers and Hammerstein for the golden years of Broadway, etc. It has overtaken me – becoming a Daemon of a taskmaster that takes no pity on me.

And as I go through this process I am reminded of Piazza and the feelings it gave me seeing it for the first time. I go back and watch videos of live performance of the piece and study the conductor score. And once again I am humbled by Guettel’s work. It is just so marvelous – but now to study the notes – it’s like looking under the hood of a luxury car that you covet. It’s like translating the Bible from the original text – ok, maybe not – but you get the idea.

Then I find out that Guettel comes from a long line of Broadway musical writers. He rebelled against it and finally went back home to his roots. And that is the part of the story I can relate to. I am not on his level, not even in the same ballpark – but I can relate to the strong pull that classic art had on us as child performers (I was also a boy soprano working in opera) and the subsequent revolt against that as puberty hit and we lost our star status. Thinking that rock and pop would satisfy the longing within us that opera and “high art” had satisfied for so long.

And then we realize it’s time to go back home. It’s not fashionable – but it’s the small voice within that calls us and we cannot deny it. And that is what really fascinates me about Guettel – he took the Hero’s Journey of art and won. At least in my book he won – with a creation like Piazza the journey is a bullseye.

And that’s all I have to say about that. For now… 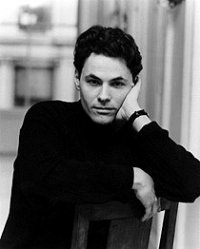 One day, his “Princess” will come? For now, she’s already here: On the day we speak, Guettel and his wife Amanda are moving into new quarters, and he muses on the music he may have produced differently had he been smitten at the time he wrote “Piazza.”

“I was looking for love when I wrote it,” he recalls of the story based on a novella by Elizabeth Spencer, which follows a young American caught up in the passion plays that are Italy’s distinctive playground, and the mother who tries to protect her from getting hurt.

And had he had Amanda by his side at that time? The “Light” may have been less electric; after all, the “energy [of pursuit] is there if the problem is not solved.”

He likes the way things have turned out: Leave “Piazza” to the players, he says; he is light-years happier with the love of his life as they settle in.

Adam Guettel (pronounced /ˈɡɛtəl/, born December 16, 1964) is an American musical theater composer and lyricist. He is best known for the musical The Light in the Piazza, for which he won two Tony Awards and the Drama Desk Award for Outstanding Orchestrations.

Early years
Guettel was born and raised in the Upper West Side of New York City. He performed as a boy soprano in operas including Pelléas et Mélisande at the Metropolitan Opera and The Magic Flute at the New York City Opera. He later claimed that he ended his career as a boy soprano at age 13, by faking that his voice was changing; he turned to music composition soon afterward. He attended Phillips Exeter Academy, Interlochen Center for the Arts and graduated from Yale University in 1987.

Career
His early works include 1996’s Floyd Collins, Love’s Fire, and Saturn Returns (which was recorded as Myths and Hymns). Guettel’s music was almost immediately characterized by its complexity and use of various strings. He is perhaps one of the modern musical theater composers most heavily influenced by the work of Stephen Sondheim (for his part, Sondheim has referred to Guettel’s work as “dazzling”.)

Guettel’s songs have been recorded by such artists as Audra McDonald and Brian d’Arcy James.

In 2004, Guettel contributed vocals to Jessica Molaskey’s P.S. Classics album Make Believe, dueting with Molaskey on the song “Glad To Be Unhappy.” After six years working on the project,[1] Guettel’s musical The Light in the Piazza opened on Broadway in 2005. The show, which starred Victoria Clark and Kelli O’Hara, met with mixed critical notices, but on June 5, 2005, Adam Guettel won the Tony Award for Best Original Score and the Tony Award for Best Orchestrations.

In 2003, one of Guettel’s future projects was said to be “a shockingly ambitious concert piece for Audra McDonald.” He also spent much of 2006 working on a musical adaptation of The Princess Bride with original screenwriter William Goldman. As of January 2007, Guettel had completed several songs for the project. An orchestral suite from the score was performed at the Hollywood Bowl in November 2006, and Lincoln Center conducted a workshop of Bride in January 2007. The project was abandoned when Goldman reportedly demanded 75 percent of the author’s share, even though Guettel was writing both the music and the lyrics.
In summer 2007, Guettel composed background music for a production of Anton Chekhov’s play Uncle Vanya at the Intiman Playhouse in Seattle, Washington.[4]
In July 2009, the Signature Theatre of Arlington, Virginia commissioned Guettel to write a new musical for their 2011-2012 season, under the auspices of their American Musical Voices Project.
Personal life
In a 2003 profile in The New York Times, Guettel revealed that he has struggled with addiction and drug problems since the age of seven, when he began smoking cigarettes. He attributed part of his interest in drugs (he called the first time he got high “the happiest moment of my life”) to family expectations, saying:

“ Because it’s not just a disease; it’s me, it’s knowing how much I could do if I kept it together, if I had the courage and stamina and willpower! I wish I could just have fun and relax and not have the responsibility of that potential to be some kind of great man! In my family, to be good is to fail. To be very good is to fail. To only do three really good things is to fail. The only thing not a failure is to be great. And that….is tiring. ”

Guettel is the son of composer, author and Juilliard School chairman Mary Rodgers and grandson of Pulitzer Prize-winning musical theater composer Richard Rodgers. His father Henry Guettel was a film executive and ran the Theater Development Fund.
When Guettel took up music composition in his mid-teens, he was encouraged by his family. His mother said that she offered him advice for around a year, “After that, he was so far beyond anything I could ever have dreamed of, I just backed off.” Richard Rodgers, who died when Guettel was 15, overheard an early composition, said he liked it and asked him to play it louder. Guettel has qualified the compliment, noting that “He was literally on his deathbed on the other side of the living-room wall.”

Guettel later rebelled against his family’s musical theater heritage, working in rock and jazz (singing and playing bass) as well as aspiring to be an actor, before realizing “that writing for character and telling stories through music was something that I really loved to do, and that allowed me to express love.” 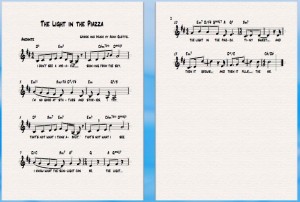 UPDATE: Just an update on this post. I’m working on learning Sibelius notation software and I did just a quick 16 bar lead sheet here of the beginning of “Light in the Piazza”. The chords I wrote are a bit off, just a sketch of the actual movement. But this was very fun to do. If you click on it for a larger view you’ll get a little sense of how much Adam does with interesting time signature changes. I just can’t say enough how much of a treasure trove this work is and how compelling Guettel is.

You can also see him in rehearsal in this video here:
https://www.conradaskland.com/blog/2010/04/where-do-musicals-come-from/