Some of my favorite Agnus Dei music is by Samuel Barber, Mozart and Schubert. As a child boy soprano I sang many masses by the great composers and always loved the sound of original Latin music texts. The Agnus Dei is traditionally one of the movements from the Catholic mass.

My version of the Agnus Dei was always intended as more of a character piece for film. I wrote it in 3/4 time with traditional orchestral snare rolls and cymbal crashes that I think gives it a slightly Viennese and aristocratic feel. Because of the aristocratic feel, I always pictured this song playing as an underscore to a screen element that is both dark and carefree. For example, a scene where The Joker is unleashing his mayhem with glee, when Hannibal Lecter is enjoying his glass of Chianti while his plans are unfolding, or yes, an underscore to Trump taking his mask off on the White House steps pretending he is Superman.

Those kinds of subtexts are beyond my skillsets or budget to represent in a video. For this video I went with straight-ahead Gothic architecture and moments of expected reverence. This video still gives “a little” taste of the original subtext I envisioned when writing this piece.

A couple mistakes I caught when listening to this piece; mistakes that I’m very surprised I did not catch or fix even back then. The word “miserere” is mispronounced by one of the vocalists with an extra “re” which becomes “misererere”. A second mistake is that the lyrics of the Agnus Dei usually repeat several times ending with “miserere nobis” (have mercy on us), but the final refrain is traditionally ended with “dona nobis pacem” (grant us peace). I did include the “dona nobis pacem” in the middle section but I ended the piece with “miserere nobis” (have mercy on us). A small detail unless you are very familiar with the Latin Mass structure and then this oversight is jarring. It was to me anyway.

I have never written a full Latin Mass but I haven’t, at various times, written different pieces from the Mass. This Agnus Dei was written around 2001. In 2007 I wrote a “Christmas Gloria” that was performed at the Christmas Eve service for Mount Vernon Presbyterian Church with full chorus and chamber ensemble.

The gargoyle from the Notre Dame cathedral was a fun addition to the video. When I was a young boy soprano I had the honor of singing acapella early music inside Notre Dame Cathedral.

Here’s a little info about the Notre Dame gargoyles and chimeras:

The gargoyles’ main purpose is very practical. As rain water runs down the roofs of Notre-Dame de Paris, it needs to drain off without dripping down the walls and potentially damaging them. By evacuating rain water, the gargoyles protect the cathedral and protect the stone from damage caused by excessive runoff. That is in fact the main difference between gargoyles and chimeras. The former serve to drain rainwater, the latter are purely decorative.

My favorite music is the Baroque music of J.S. Bach and also early music like Palestrina and Orlando de Lassus. When I write neo-classical church music or music in Latin I always think back to my young days as a boy soprano singing in cathedrals in Seattle and Europe. 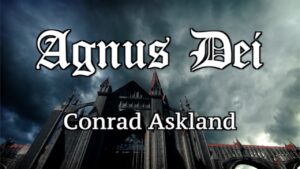 LYRICS
Agnus Dei, qui tollis peccata mundi,
Lamb of God, who takes away the sins of the world,

miserere nobis.
have mercy on us.

Agnus Dei, qui tollis peccata mundi,
Lamb of God, who takes away the sins of the world,