CAPE CANAVERAL, Florida — A former stiltwalker and fire-eater stole NASA’s show Thursday, saying he’ll be “like a kid in a candy store” experimenting with zero-gravity tricks on his upcoming tourist trip to the international space station.

Cirque du Soleil founder Guy Laliberte is shelling out a reported $35 million for his round-trip ticket aboard a Russian spacecraft. He will rocket into orbit from Kazakhstan at the end of September with a professional astronaut and cosmonaut, and spend more than a week at the space station.

At a news conference in Houston, as 13 people circled overhead on the shuttle-station complex, Laliberte was bombarded with questions from journalists, most of them gathered in his home country of Canada.

“As you know, I’m not a scientist. I’m not a doctor. I’m not an engineer. I’m an artist. I’m a creator, and I’ll try to do and accomplish this mission with my creativity and what life has given me as a tool,” said the Quebec billionaire, who turns 50 in September.

Laliberte assured reporters that he will not play with any fire in space — for obvious reasons. But he hopes to try some acrobatics in weightlessness and may teach his crewmates a card trick or two.

“I don’t know how we’ll be using stilts up there,” he said. “But I think there are a couple little things, hopefully, that I have learned in my career of street entertainer that I will try to apply up there.”

Laliberte said he’s seen pictures of floating bottles and other items at the space station that might make for some interesting tricks. But he noted, “I think I will be more like a kid in a candy store up there, discovering things that those guys know. Because I know what I can do on Earth. But what I’m really interested, is to gain and learning what their world is.”

He described his life as a fairy tale and said watching men land on the moon 40 years ago this week, on a black-and-white television at a campground in the middle of the forest, taught him that all things are possible. Now it’s his turn to inspire the next generation.

“It’s important to show examples of such things toward any type of activities, circus, entertainment, space exploration, it doesn’t matter,” said Laliberte, the father of five young children.

As Laliberte talked up creativity, art and safe water for the world’s poor in both English and French, astronauts 220 miles (354 kilometres) up placed science experiments on the new front porch of Japan’s $1 billion space station lab.

The combined crews of the space station and shuttle Endeavour installed the porch last week.

Thursday’s work involved using the 33-foot (10-meter) robot arm on the lab, Kibo — Japanese for “hope” — to install three experiments. An X-ray telescope went on first, then a set of communication equipment. Last was a space environment monitor for measuring atomic oxygen, cosmic dust and light particles, and their effects on electronics and other materials.

Japanese astronaut Koichi Wakata was first to operate the lab’s robot arm, being used for the first time to hoist payloads. He’s been at the space station since March and will return to Earth next week aboard Endeavour.

Back in Houston at the home of Mission Control, meanwhile, Laliberte is training all week with Soyuz crewmates Jeffrey Williams and Maxim Suraev, learning emergency procedures and familiarizing himself with NASA equipment. 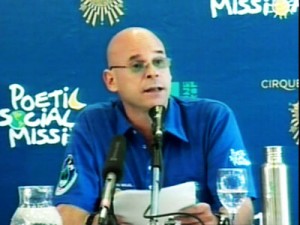 Cirque du Soleil founder Guy Laliberte is on the countdown to become the world’s seventh, and Canada’s first, space tourist.

Laliberte has begun training at the Cosmonaut Training Centre Star City outside Moscow for his ride on a Russian Soyuz space craft this September.

The Quebec billionaire was listed as one of the 100 most influential people in the world by Time magazine in 2004.

[Guy Laliberte, Founder, Cirque Du Soleil]:
“This is a really big moment for me. I have been introduced as many things in the past: fire-breather, entrepreneur, performer, partier. But today, to be introduced as a private space explorer is an unbelievable and humbling feeling.”

Laliberte will travel on board the Soyuz TMA-16 spacecraft with a Russian cosmonaut and a NASA astronaut.

[Guy Laliberte, Founder, Cirque Du Soleil]:
“I found that missing sense of discovery and I rediscovered my sense of adventure, the very essence of what stimulated me for many years when I lived and worked on the street. That very special camaraderie and the underlying law of ‘I will watch your back and you watch mine’. I found it all over again at the International Space Community.

During his 12-day stay at the International Space Station, Laliberte hopes to raise awareness on water issues in the world.

[Guy Laliberte, Founder, Cirque Du Soleil]:
“Why water? Because it is a source of life and there is an urgent need to raise awareness world-wide of water issues. My theme is Water for all, All for water.”

The Russian federal space agency launches a Soyuz spacecraft to the station every six months to rotate the crew.

16 countries are involved, and this is the time when private citizens can pay to travel into space.