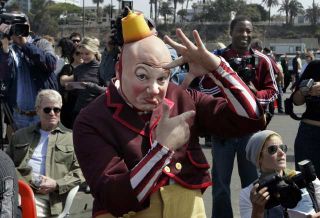 A five-member committee of the Los Angeles City Council voted this morning to move ahead with a $30- million loan that would bring a decade of Cirque du Soleil performances to the Kodak Theatre in Hollywood.

The council’s Housing, Community and Economic Development Committee unanimously forwarded the loan proposal to the full council for a vote, saying the deal would boost the economy by drawing tourists to the Hollywood & Highland shopping mall, where the theater is located.

Under the proposed loan agreement, TheatreDreams LA/CHI would promise to create no fewer than 858 jobs and stage the acrobatic show 368 times per year.

“This is really going to be, outside of the Academy Awards, the landmark show in Hollywood,” said Council President Eric Garcetti, whose district includes the mall.

The Community Development Department, which is processing the loan, estimated the city already has invested $127 million in the Hollywood & Highland complex, with a majority of that money going toward the construction of the underground parking garage and the theater.

On Tuesday, Councilman Dennis Zine questioned whether so much federal loan money should be devoted to a single economic development project. But Councilman Tony Cardenas said this morning that critics were taking aim at the deal simply because the facility is “so high-profile and so pretty.”

CIM Group, which owns Hollywood & Highland, sought the loan. The company is also relying on the city for financial help with development projects planned in Mid-City and Reseda. CIM Group leases the Kodak Theatre from the city, and its Urban Real Estate Fund is part of TheatreDreams LA/CHI. Under the proposal, the theater will continue to serve as the home of the annual Academy Awards ceremony.