Also this information on notation and performance for Concert Band Percussion Instruments:

Suspend the triangle from two clips. Play on the closed side using a single stoke roll to create a smooth, sustained sound.

A general rule for dampening the triangle is to let everything ring unless there are obvious unison staccato notes. Listen and emulate the musical interpretation of the ensemble.

The triangle is dampened by squeezing the remaining three fingers of the holding hand into the heel of the hand.

The tambourine is a hand drum with two different sounding parts: the head and the jingles.

The head is of medium thickness and is stretched over the shell and stays tight under all weather conditions.

Standard tambourine size is about ten inches in diameter with a double row of jingles (preferably staggered).

The shell should be lightweight to allow easy movement and to permit an acceptable vibration.

Grip the tambourine with either hand. Place the thumb on the top rim and let the fingers curl around the shell under the head (like a baseball grip). A muffled timbre is produced by placing the thumb on the head.

Since speed and volume are restricted when playing with one hand, another technique must be devised. Tambourine techniques are affected greatly by different dynamics and tempos.

To muffle is to partially mute the head to lessen the vibrations. Reasons for muffling are: 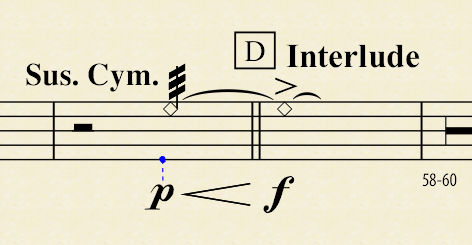