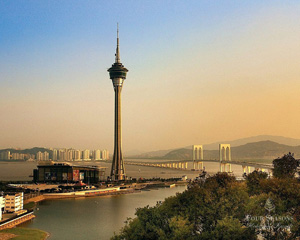 Two recent articles on the global economy impact on the Venetian Macau and the Las Vegas Sands Corporation. I will decline my own commentary at this time.

On Macau’s dusty Cotai strip, the cranes at the Las Vegas Sands construction site stand idle at dusk atop the half-finished husks of three massive towers. Weary batches of construction workers, laid off en masse, stream out of the site’s turnstiles, many for the last time.

A golden streak that started in 2002 saw Macau transformed from a sleepy former Portuguese colonial backwater into a Las Vegas-style gambling paradise. But now Macau’s luck may be running out.

Chen Rui, a native of Zhanjiang across the Chinese border, one of an army of migrant workers brought in to ease Macau’s acute labour shortage amid the construction boom, says: “I am in a state of shock, the whole thing has made me sleepless for days.

“The economy is bad in China. Everything is more expensive so it is going to affect us badly. Even if we want to find another construction site it will be very difficult.”

Last week, debt-straddled Las Vegas Sands shocked many in this brash boomtown by laying off most of the 11 000 workers on two Cotai strip sites – a stone’s throw from the palatial 3 000-suite Venetian Macau, which Sands owner Sheldon Adelson had opened just a year ago with much fanfare.

Some blame the government for the casino glut, for issuing too many casino licences and giving land to developers without redistributing the new found wealth.

Ng Sek Io, a laid-off worker still clutching a red helmet outside the suspended construction projects, says: “I am a Macau person and all of Macau’s half-million people are angry with the government.

“It is a corrupt and incompetent government and it has not considered our current livelihood difficulties.”

Macau’s gaming tycoon, Stanley Ho, has warned that the recession could last up to three years.

But even before the downturn, visa restrictions imposed by China on risk-loving Chinese punters had begun to corrode gaming revenues.

Melco’s City of Dreams casino, a joint venture by the sons of Australian tycoon Kerry Packer and Stanley Ho, is still due to open on the Cotai strip next year and the reclaimed isthmus is the only place left in land-cramped Macau for mega-projects.

Analysts say the slowdown is only a speed bump, as Macau is still the only place on Chinese soil where casinos are allowed to operate. Right now, though, laid-off workers will battle to find jobs.

Jose Coutinho, a Macau legislator, says: “We are going to have enormous difficulties because we have not diversified our industry. We are quite dependent on gaming.”

But those who have benefited from higher property prices and wages are taking Macau’s shifting fortunes in stride.

Martin Kou, a restaurant manager, says: “Before, jobs looked for people, but now people are looking for jobs. It is like a change of feng shui for us, the end of a cycle.”

IS MACAU A LOSING BET FOR LAS VEGAS SANDS?
http://industry.bnet.com/travel/1000350/is-the-macao-a-losing-bet-for-las-vegas-sands/

The Venetian Macao Resort Hotel was supposed to be a 3,000-suite mega-resort, a kind of Disneyland copy of Venice, with casinos and shopping for an upscale Asian market. But now Las Vegas Sands Corp. is $10 billion in debt and sliding, its projects postponed or canceled just as the economy takes a swandive.

A look at its quarterly report doesnâ€™t hold much back. So far, on the Cotai strip, Las Vegas Sands owns the Venetian Macao, Sands Macao and the Four Seasons Macao (managed by the Four Seasons Hotel Inc.) At some point in the future it will feature 18 mansions and 1 million square feet of apartments.

The big problem is that there are plans for five more resorts, known in U.S. Securities and Exchange Commission filings as parcels 3, 5, 6, 7 and 8 â€“ but due to the credit crisis, loans have dried up â€” and thre are few banks willing to bankroll a new casino. In early November, Las Vegas Sands decided to suspend construction while it searched for $2 billion in financing. Since then, Las Vegas Sands found the money, but decided to halt development in Macao while it concentrated on its other holdings.

Unfortunately, the company doesnâ€™t have all the government approvals to develop the parcels â€” and if they donâ€™t receive a â€œland concessionâ€ from Macao: â€œThe Company . . . could forfeit all or a substantial part of its $1.45 billion in capitalized construction costs.â€ According to the document, if the company doesnâ€™t complete development of Parcel 3 by August 2011, it could lose its right to operate the Venetian Macao and any other of its developments forever. So, the entirety of the development, all the billions of dollars, could be a wash if Las Vegas Sands canâ€™t find enough financing in the next year or so.

Another problem is that the slowing economy is hitting South China.Â  According to reports, until recently China was experiencing about 10 percent growth each year â€” until 2008. Now at only 8 percent, the Chinese government announced a $586 billion stimulus package on airports, subways and other infrastructure.

The new austerity is also affecting gaming. Although in 2006 Macao delivered gaming revenues that surpassed Las Vegas , the number of casinos in the area doubled and divided those profits. The nouveau riche, with plenty of money from cheap imports, are now being denied visas under Chinaâ€™s newfound belief that gambling will drag the economy down further. Growth of visitors dropped to 2 percent in September, down from 17 percent for the earlier part of 2008.

Itâ€™s a losing bet when both the government and economy are against your project. And it makes it easier for others to criticize.

â€œIf someone tries to build six hotels at once and finds the market canâ€™t accommodate it, thereâ€™s a problem in planning,â€ casino mogul Steve Wynn, owner of Wynn Resorts Ltd. said. Executives from Sands said that they werenâ€™t the only company halting projects.

While Las Vegas Sands remains optimistic, its competitors seem like the only winners.

Melco Crown Entertainment Ltd., owned by Australian businessman James Packer and Lawrence Ho, son of a Macao magnate, will likely open the only new Macao casino in 2009, the $2.1 billion City of Dreams project. The partnersâ€™ spokesman said the company welcomes the reduced competition.

As the end of 2008 approaches, Las Vegas Sands has approximately 31 months to complete development or watch theÂ  Macao project, and billions of dollars, drift away. The reality may be that in keeping all of its other holdings thriving, including its new resort in Singapore next year, Las Vegas Sands may have to let it go.