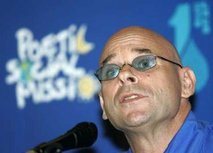 MONTREAL — A website that covers NASA is reporting that Guy Laliberte, the founder of the Cirque du soleil, will visit the International Space Station this September.

“NASA Watch,” which has no official links with the American space agency, says it has learned from multiple sources that Laliberte will fly into orbit aboard a Soyuz spacecraft .

Renee-Claude Menard, a Cirque spokeswoman, was not immediately available for comment but a message on her voice mail indicated she is on a business trip to Russia.

The Canadian Space Agency is holding a news conference at its Montreal-area headquarters on Thursday to announce what it calls the first philanthropic mission to the space station by a private Canadian explorer.

The announcement is also being made simultaneously in Moscow.

A spokeswoman for Space Adventures, the company that helps book space flights, would not confirm that Laliberte is the next Canadian space traveller.

Stacey Tearne said from Virginia that an announcement would be made on Thursday.