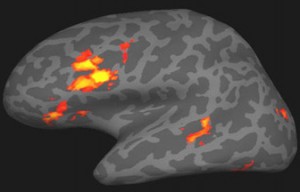 Although humans and chimpanzees genetically vary by just 1.2 percent, that small percentage makes a world of difference in the mental and linguistic capabilities between the two species. A study shows that a certain form of neuropsin, a protein that plays a role in learning and memory, is expressed only in the central nervous systems of humans. The scientists conclude that this critical difference originated less than 5 million years ago.

Dr. Bing Su of the Chinese Academy of Sciences in Kunming, China, and other researchers analyzed the DNA of humans and several species of apes and monkeys. Previously they had found that type II neuropsin, a longer form of the protein, is not expressed in the prefrontal cortex (PFC) of lesser apes and Old World monkeys. In the new study, they tested the expression of type II in the PFC of two great ape species, chimpanzees and orangutans, and found that it was not present in these closely related species either. Since these two species diverged most recently from human ancestors (about 5 and 14 million years ago respectively), this finding demonstrates that type II is a human-specific mutation and originated relatively recently.

The researchers note that more studies should look further into the biological function of type II neuropsin in humans, in order to understand the genetic basis that underlies the traits that set humans apart from nonhuman primates.

*The study was published online in Human Mutation, the official journal of the Human Genome Variation Society.