The review is in for C.L. Askland’s “PAN the musical” world premiere! 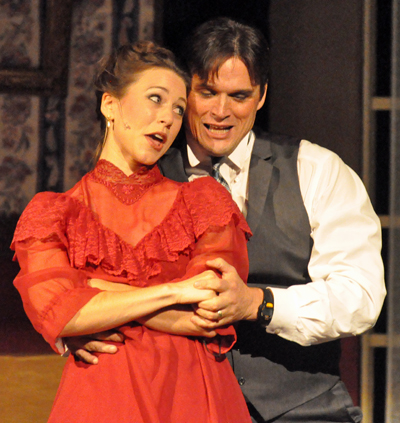 “…this show delights believers of any age”

“Throughout, the musicality and original score stuns”

“The aesthetics of this show…are a knockout”

“It is certainly appropriate for kids”

PAN the musical “asks the big questions, it makes you think, and hands you a mirror”

“Pan: The Musical is a local, skilled and professional-caliber production with a big heart”

Straight on ’til morning

Conrad Askland scripts and orchestrates and Joe Bowen directs this heartwarming and original take on a classic pillar of English literature in Pan: The Musical. Complete with everything from Youngster Extraordinaire, Peter, to spectacular musicianship and flying people, this show delights believers of any age.

Joe Bowen opens fabulously as the reluctantly paternal George Darling. Coexisting with his progeny proves a lofty expectation, as he fights dog and doting Mrs. Darling (Karen Pollack) to attend a party downstairs. When Wendy’s (Molly Wilson) not allowed to come along, we hear the first snippet of her inarguably gifted young pipes and the simultaneous unhappiness of her apathetic father.

Soon, infinitely youthful Peter (Ava Ross) and the Darling siblings meet as Peter rummages through their room in search of his shadow on hiatus. Morose and feeling rather neglected, Wendy and her brothers head off to Neverland, via Peter’s preferred method of transportation (flight) and an uncanny knack for navigation (second star to the left, and straight on ‘til morning).

Askland’s take on the Neverlandian pirate troupe is excellent. Captain Hook (Peter Whited) is delightfully menacing, growling perfectly and displaying his namesake hand replacement to a T. His vendetta against Peter, a product of his alligator-induced hand-loss is perfectly played, and his delivery is spot-on. 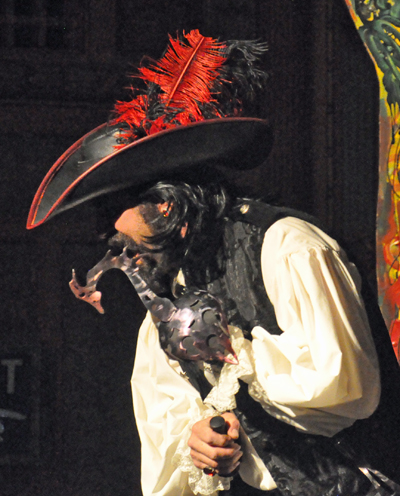 Second in command and exceptionally acted, Smee (Brendan Francis), addresses the audience regularly, helps them boo Hook, and doesn’t seem to care for his boss. His continued loyalty may point to a rather thorny prior contract.

As the Pirates employ various schemes to off Peter, Wendy is appointed as honorary mother to the wonderfully well cast assortment of Lost Boys. Choreographed fabulously by Glynna Goff, every number in which they move is a joy to watch. They add another classic, yet original, aspect to this fun show.

The aesthetics of this show, too, are a knockout. Between beautiful set and artwork by Deirdre Czoborek and a fascinating display of shadow theatre by Anna and Sarah Furrow (set to Adia Bowen’s sonorous voice), it’s as much fun to watch the show as to listen. 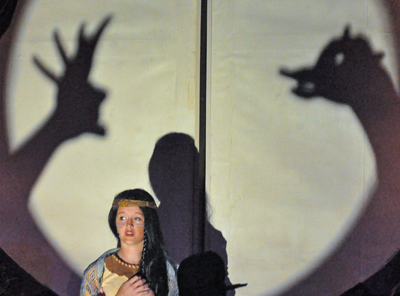 Though it is certainly appropriate for kids, adults, fear not. Forty-year-olds will love this as much as their third-grader. And the grandparents will recognize the story immediately. It asks the big questions, it makes you think, and hands you a mirror. Most importantly, Pan: The Musical is a local, skilled and professional-caliber production with a big heart.

The production plays September 20 through October 6 at the lovely Lincoln Theatre in Mt. Vernon. See the Lincoln Theatre website for precise dates and times, along with ticket prices.

One thought on “ENNW Magazine Review of C.L. Askland’s “PAN the musical””