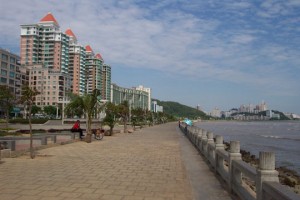 My first trip into Zhuhai China included great shopping, great food, beggars and pickpockets. Zhuhai China is just over the border from Macau – in the Southeast part of China near Hong Kong. The strict visa restrictions have been lifted now that the Olympics are over so it’s a little easier for us Expats (Westerners living in China) to go back and forth over the border now. Photo above is the waterfront in Zhuhai, and you can see the buildings in Macau from this vantage point.

Immediately after entering through the Gonbei Gate (between Macau and Zhuhai) we were approached by beggars. They would follow you for a bit and tug on your arm. There is a large shopping area just over the border too. It’s right down the stairs as you exit the border gate – you can’t miss it. The stalls are indoor underground. Much like the booths I have seen in Mongkok, Hong Kong at the Ladies’ Market area – but it was a little cleaner being indoors. And not quite so much of the yelling and grabbing for your attention, although a little bit. The WORST place I have been for vendors yelling and grabbing you was Phuket, Thailand – it is really too much over there.

Before we had actually cleared the border gate a Chinese woman came up to us and told us “be very careful” and told us to watch our bags for pickpockets. A friend of ours, a Macau native, was our guide for the day and showed us her purse. It was slit down the side. A pickpocket had cut it the week before trying to get into her purse; but that happend in Macau at San Malo square. I have also heard of other people losing their wallets and bags in San Malo square. So we really had our guard up, we thought…

We started with lunch at a local Dim Sum restaurant on the waterfront. A short taxi ride for 10RNB, about $1.35US. I’m not much of an adventurous eater, but there was plenty of food I really liked. Even the salmon sashimi was excellent. We had congee soup, tea, custard tarts, shrimp dim sum, beef ribs – it was all good. And only cost about $12US each. Was told if he hadn’t gone crazy on Western style desserts, the meal might have only cost us about $5 a piece.

Back to the border gate for shopping. Zhuhai is the place to go for anything bootleg. We were instruced “assume everything is fake, nothing is real. In DVD stores you do not barter, but you can barter with vendors.” In Hong Kong a really good deal on a Rolex copy is $250HK ($31US). But in Zhuhai there are Rolex copies going for as low as $50RNB ($7US). Gucci, Diesel and Calvin Klein (or “Calven Kline”) are everywhere. A DVD goes for $8-12RNB ($1.10 to $1.60US). PC software (even Windows, XP and Photoshop) for $22RNB ($3.20US). The complete seven episodes of Seinfeld for $250RNB ($35US) and three seasons of Boston Legal for $150RNB ($20US). Of course everything for sale is bootleg. A complete set of PING golf clubs including bag with wheels at an OPENING price of $1350RNB ($170US roughly), which would probably easily go for $800RNB ($105US) or less.

We talked about the artists that create the originals of this merchandise. Like the research and development that goes into creating new lines of gold clubs. “It’s not the manufacturing that costs money, it’s the R&D”. And also about the actors and performance artists that are not making any money on the counterfeit items.

The other side of the coin is that very few Chinese residents could afford to shell out $150RNB ($20US) for the real deal. We were told that many day laborers in China make a MONTHLY salary of $800RNB ($105US). It’s a little difficult for us to understand that people can live on that. People have told us “Macau is expensive” but it doesn’t seem expensive to us. In fact, people will say “Macau is expensive, but not for you.” So we were really amazed how low the prices were in mainland China.

Ok, so maybe you’re waiting for my pickpocket story. We left the main front shopping area at the border gate and walked a ways into town. Here were the typical outdoor street vendors with the cheezy stalls and cardboard tables with goods. A lot of the same stuff – but with the addition of animals (doves, turtles, rabbits, parrots, fish), everyday cheap clothes and stuff for the household.

As we made our way into the main square in Zhuhai we ended up walking down a sort of alley with a building to our left and a fence on the right. No vendors, just us walking down this about a block and I was at the rear of our wagon train. I have my backpack securely on one strap off one shoulder. I didn’t want to wear it on my back because of pickpockets. I feel a light tug, turn around and there’s this kid about 14 smoking a cigarette with his hand on the zipper of my backpack. I see red, I am SO pissed off – and this kid just looks at me like “what are you going to do?”. And he’s right, what WAS I going to do? Nothing, just kept walking. But after that we all held our backpacks backwards on our fronts like holding a baby. I am curious how long he was trailing us and waiting for the right moment.

After that I really felt like we all had a big bullseye on us. We didn’t see many other Westerners on our little day trip – Maybe 10 all day. The traffic patterns in Zhuhai are also very crazy to what we are used to. We saw people seriously almost mowed over by a moped. It was a little scary for us. We realized we have been very insulated by living in Macau, which in 2008 is now a reasonably safe place to live.

I definately would not go to Zhuhai in the future alone, and I would be very careful about your belongings. Not just careful – I would lock everything up and keep it in front of you at all times.

Our guide also told us not to stand very close to the street when waiting for taxis on the sidewalks. She said it’s not uncommon for a moped to blaze by and grab your bags as they pass.

Another local tip: If you do buy DVD’s in Zhuhai, make the merchant play them on their DVD player for you. Have been told it’s very common for merchants to sell DVD’s and software that don’t work.

The other side of Zhuhai? One of Zhuhai’s international accolades include “the Best Model of International Residential Environment Improvement” awarded by the United Nations. It’s also known as a city of gardens and flowers.

Our guide told us that anytime you have a border between two countries, there are always going to be problems like pickpockets, scams and saavy vendors. Made me think of Tijuana, Mexico back near home in the US. When you cross the border you are very vulnerable. And as I learned recently from a local Macau native: “Americans are very vulnerable targets because they have good hearts and are very naiive.”

I think that’s all true. Looking forward to when I’m more “seasoned” in Asia and don’t keep getting taken left and right. But being a Ghylo American, I think my chances are slim…