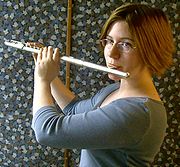 Damn the internet for always teaching me new things. I am very happy to think that I already know everything. I stand corrected once again; this time on the use of the word “flutist” vs. “flautist”.

I’m still getting used to the French Horn being referred to as just “Horn” – will the changes never cease? My musical world is crumbling before me….

Some friends had a bet going and asked me what was correct when referring to a flute player: flutist or flautist. I declared most assuredly that the correct term was “flautist”. To my memory, I have worked with many flutists and they always correct me to say “flautist.”

But it’s wrong – at least according to internet sources I have read including Wikipedia.

The choice of “flautist” (from the Italian flautista, from flauto, and adopted due to eighteenth century Italian influence) versus “flutist” is the source of dispute among players of the instrument.

“Flutist” is the earlier term in the English language, dating from at least 1603 (the earliest quote cited by the Oxford English Dictionary), while “flautist” is not recorded before 1860, when it was used by Nathaniel Hawthorne in The Marble Faun. While the print version of the OED does not indicate any regional preference for either form, the online Compact OED characterizes “flutist” as an American usage.

Richard Rockstro in his three volume treatise The Flute written in England in 1890 uses “flute-player.” He also uses “fluteist” and the less popular “flutomater”.

The American player and writer Nancy Toff, in her The Flute Book, devotes more than a page to the subject, commenting that she is asked “Are you a flutist or a flautist?” on a weekly basis. She prefers “flutist”: “Ascribe my insistence either to a modest lack of pretension or to etymological evidence; the result is the same.” Toff, who is also an editor for Oxford University Press, describes in some detail the etymology of words for “flute,” comparing OED, Fowler’s Dictionary of Modern Usage, Evans’ Dictionary of Contemporary American Usage, and Copperud’s American Usage and Style: The Consensus before arriving at her conclusion.

The first edition of the OED lists fluter as dating from circa 1400 and Fowler’s Modern English Usage[4] states that “there seems no good reason” why flautist should have prevailed over fluter or flutist. However, according to Webster’s Dictionary of English Usage, flautist is the preferred term in British English, and while both terms are used in American English flutist is “by far the more common choice.”

James Galway summed up the way he feels about “flautist,” saying, “I am a flute player not a flautist. I don’t have a flaut and I’ve never flauted.”

3 thoughts on “Flutist vs. Flautist”