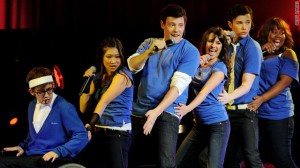 I love the television series “Glee”. I didn’t think much about it until I saw a friend post on Facebook “Is there anyone who actually likes Glee? It’s the worst show ever made. I don’t think anyone actually watches it.”

When reading that I felt a burst of patriotism and defensiveness; “Don’t say that about Glee!”. I love the horrible dialogue and political incorrectness of the cheerleading coach. I love some of the agonizingly slow and drawn out plot lines; like when it took 30,000 episodes for the Glee coach to finally discover his wife wasn’t pregnant.

The specific musical cornucopia for me is a resource to check ranges for young voices. I’m working on a large vocal project for teens and I find myself many times during each episode running to my keyboard and checking pitches and ranges of the pieces. There are some specific sweet tones for every instrument and that goes for the human voice as well. Songs that switch from head to chest voice have a certain window of notes that seems to be a common switch for most singers. A lot of this can be reinforced by watching Glee and listening carefully.

But I think maybe I spend all my time doing that to justify to myself that I just like watching the show….