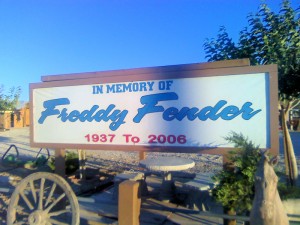 Well this is certainly a trip. A friend showed me this photo of a Freddy Fender memorial sign in Lucerne Valley, CA. And I guess it’s just a sign out in the middle of the California High Desert but to me it has much more significance.

I lived in the High Desert for about 18 years. And Lucerne Valley was one of my very first bar gigs playing country music. Around 1988 I played in a little dive biker bar in Lucerne Valley for $35 (USD) a night and one free shot of whiskey every set. Also played a little joint there we called “The Y” because it was at the Y in the road that would take you up to Big Bear Mountain or on to 29 Palms and Palm Springs.

I remember very vividly playing this little Lucerne Valley bar that probably held 30 people. The band was drunk and the patrons were drunk and they would tell us how good we were and all that kind of stuff.

Fast forward 10 years after that and I was producing albums in Southern California and playing keyboards for Freddy Fender. And still every once in a while if I had a night off I would go into Lucerne Valley to pick up a gig for fifty bucks. Or on my night off would go to that little country bar and hide in the corner listening to the band. And I would wonder: Were those players dreaming day and night like me about playing better gigs?

Fast forward 10 years after Freddy Fender and I’m sitting in my penthouse apartment in China doing music for Cirque Du Soleil. I’d say now is the first time in my life where I haven’t dreamt about “the next gig”, because I like the Cirque gig so much. But I still always have the next project I’m working on.

Anyway, a big shout out to all my fellow High Desert Rats (and I use that term with sincere affection) out in Lucerne Valley. I sure hope you guys still listen to country music…