What a fun show this was! I think it was a real bullseye for the kids, META Performing Arts and the artistic team.

This is a show that will leave it’s mark for several years. It has raised the bar in several areas for local children’s theatre. We took a lot of chances, had a lot of “firsts” for McIntyre Hall – and it all worked.

Someone asked me today if I knew the show would be this good, and I said Yes. However, there was definately some support I needed from the directors and producers to get my end done – and they came through 110%. Ok, blah blah blah, it rocked and everyone did their part.

This group of kids became such a very polished professional group. Even backstage it was total pro. Amazing considering the ages we were working with. So YOU KIDS ROCK!

I had one person tell me they saw the touring Seussical show with Cathy Rigby and felt that ours was better. They were also very surprised at how “high class” our orchestra sounded. Mostly when I get compliments like that I brush them off a bit, but in the case of this show I know it’s true. I really do think this crew could go up against a touring show. 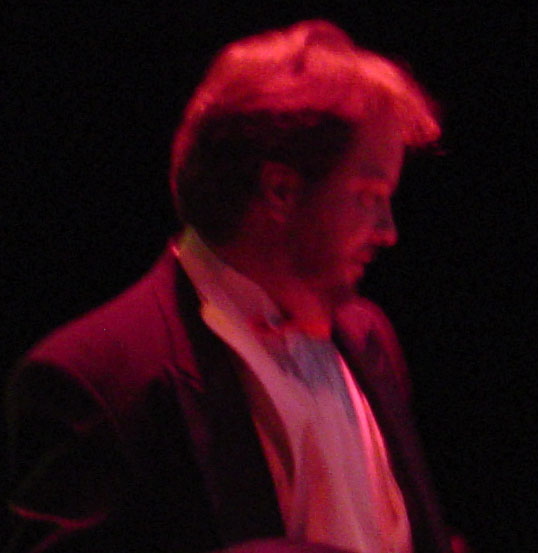 And the most awesome comment I got today was from a mother who said her child had never participating in such a professional environment before. It made me remember when I was a kid and doing pro and semi-pro gigs. Made me smile. For many of the kids in this run of Seussical, this show will be a life altering experience for them. Some will realize they do not have to just be cute and slide along, they can actually step to the plate and bring it.

For some it means the next time they have a goal they are really driven to strive for, that this time they have a chance at acheiving it. Theatre also has a way of breaking down stereotypes. We all have a little mold we fit into, fulfilling other people’s expectations of ourselves. But in theatre we have a chance to reach out and be something different. Kids that have learning disabilities, are socially challenged; WHATEVER the shortcoming is (and we ALL have shortcomings, don’t kid yourself) – in theatre for each show they have a level playing field to start fresh.

For myself, my early performance experiences were extremely intense. It was largely a classical environment and I was a choirboy. Rehearsals were intense, performances were intense – but those shows instilled in me that nothing else will do. Nothing else is acceptable. There’s a saying (well, ok, it’s scripture) a friend shared with me that says if we bring our very best we will perform before kings. To perform before kings is not so important to me (I’ve had goals like that previously in life, and when I reached them they were empty and ephemeral). But it is MOST important that a little of that idea, the idea of reaching with absolute resolve in the arts, has been passed on with this show. At least I hope it has.

As the Cat in the Hat would say: “How sad! How terribly terribly Sad! Isn’t that Sad?” – the run is over. On to the next. Deep breath. Remember the mountain we climbed together. Another opening, another show – but life is a little sweeter for having been involved in this production……