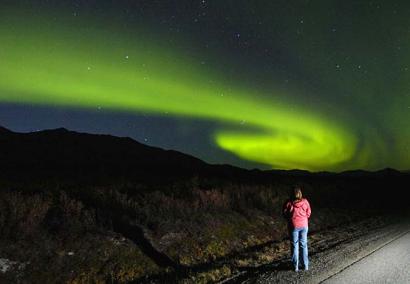 Cape Canaveral, Fla. â€” Scientists have exposed some of the mystery behind the northern lights.

On Thursday, NASA released findings that indicate magnetic explosions about one-third of the way to the moon cause the northern lights, or aurora borealis, to burst in spectacular shapes and colors, and dance across the sky.

Did you know there was controversy over the cause of the Aurora Borealis in the Great White North? I didn’t. Had always understood it to be the reflection of light at the poles, nothing of a mystery.

Several years ago I played the Alaska State Fair (I think it was 2003) with Freddy Fender and for the first time got to see the Aurora Borealis in person. It is really one of those things you have to see in person – you don’t get the feel of it by seeing it on video or the big screen. It’s appears as if truly magical!