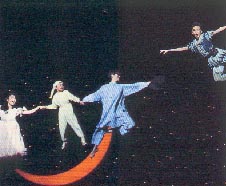 How does Peter Pan fly through the air during live theatre shows? Find out at flybyfoy.com – one of the originators for stage flight, and one of the earliest pro theatre flight crews to work on Peter Pan.

Currently they have large touring, medium professional, church and community theatre projects going on throughout the United States. Checkout their website for more info at flybyfoy.com

In talking to other people about Foy, it would seem they are recognized as the only company in America providing special fly effects for theatre – specifically for Peter Pan and the Wizard of Oz. For the Wizard of Oz they have a dedicated ballon basket that rises up for the final scene. 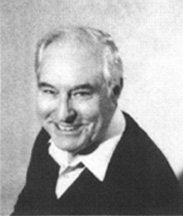 The company was started by Peter Foy. Here’s an excerpt on his background:
In 1950, a young Englishman named Peter Foy sailed from London’s West End to stage the flying for a Broadway production of Peter Pan, starring Jean Arthur and Boris Karloff. Foy’s services and the flying equipment were provided by Kirby’s Flying Ballets, a British company hired by the show’s producers after they discovered that virtually no theatrical flying had been performed in the United States for more than two decades.

One thought on “Fly By Foy – Theatre Flight Magic”