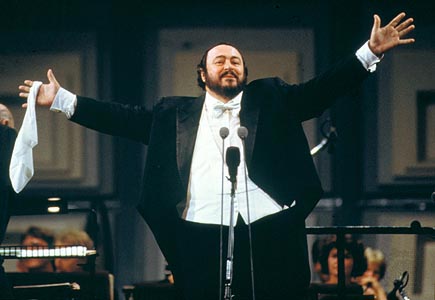 This is how I remember Pavarotti – Robust, bigger than life and holding his white handkerchief. When I was in high school I got to see him perform live at the Seattle Coliseum at the Seattle Center. It was truly unbelievable. My father played his albums over and over when I was a kid. In our household Pavarotti was a name that was revered with the utmost respect.

I read his biography some twenty years ago. Hopefully the details in my memory are correct – he worked until he was almost 30 as a door to door salesman in Italy while waiting for a break in Opera. His wife’s family thought he was kind of a loser because he didn’t have a real career going. Then he won a role in his late twenties – and his career took off within a few short years after that.

That was a role model for me starting in music – to give it your all and roll the dice, no turning back. Pavarotti was an inspiration for sticking with your dreams, staying true to the fire within that sometimes makes you look…well….a bit odd.

Interesting side note. The young Pavarotti — who played soccer with his town’s junior team — joined the church choir with his father and traveled with him to Wales, where the singing group won first prize at the Llangollen International singing competition.

That experience in Llangollen gave him the passion to pursue singing. I competed with the Northwest Boychoir also at the Llangollen International singing competition – I wish I had a cool story like that. All I remember is they had an awesome simulated wave machine in a pool that we played in. Mmmm…..note to self: come up with cool stories for obituaries….

“For opera to survive today, Riding wrote, it needs not only new music but also “exciting young singers.” Pavarotti was that singer, in the right place and the right time for his generation.”

I don’t know if I can say “we’ll miss you Pavarotti”, because he gave us a gift that still runs strong in the arts. I’m thankful we have great recordings of his voice. There is nothing like it. 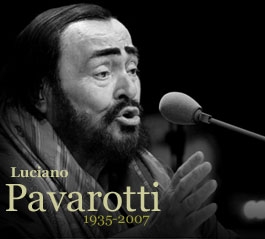 One thought on “Luciano Pavarotti Dead at 71”