Shortly after writing this piece, I was talking with a friend about Mary Shelley’s Frankenstein Novel. I pulled up the piece to listen to and it struck me as a good fit for the story of Frankenstein.

Originally I wrote this piece as part of a class on Game Audio with Berklee College of Music. (Instructor Gina Zdanowicz runs a fantastic class and I highly recommend it if you are interested in game audio). This piece was originally called “Adaptive Layer Battle Theme One”.

Game audio is written so that many different stems of music can be superimposed over each other. These different layers can be used to signify various levels of threat. For instance, if you are playing a game and out in the country side then the music might be light an unobtrusive. But as you get near a castle the music builds a bit, and then when you approach the castle guards or enter the castle the music becomes full and more threatening.

So what you are hearing in this theme is actually five different layers of music that are added sequentially. Each section is around 55 seconds long (so there are five layers of music that are added). In a gaming environment you would never hear the layers sequentially like this, you would hear the layers superimposed depending on the threat level of your location (or an approaching threat) in the game.

I’ve been working with Final Cut Pro software for two weeks now and this video contains a lot of new elements for me. One new element in this video is that I added sound effects to the soundtrack. You’ll hear some thunder clashes, water boiling and mouse chatter. Even with ducking the audio during the sound effects, the final video cut down the track by a decibel or two so I’m a little bummed about that but I wasn’t able to figure out how to add sound effects and still maintain the same audio output of the main score (I spent a fair amount of time ducking the track down for the sound effects, but the final output still affected the entire track for some reason that I’m not aware of).

My first experience with the Frankenstein story was as a young child. I think I had all of the “Power Records” releases on anything creepy and scary. I would play the 45rpm record and read along in the comic book. Even as a child I remember being struck that Frankenstein’s monster was very articulate and brilliant in some conversations with the Doctor. The Power Records version ended, to my memory, with the Monster and Doctor Frankenstein in one of the icy Polar regions and Frankenstein fell into a splitting iceberg. 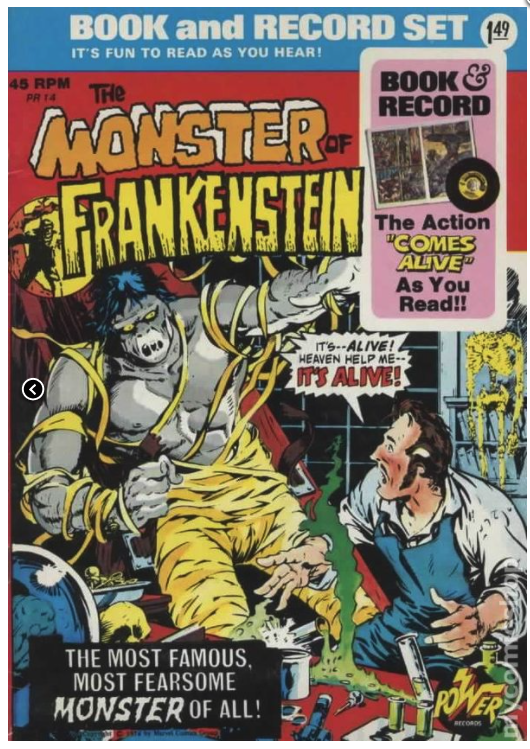 Later in college, I read Mary Shelley’s Frankenstein and again struck by how articulate and thought-provoking the Monster was. Very different from those old black and white movies of a Frankenstein that seems to have suffered a lobotomy.

A few years ago I saw the National Theater Live stage presentation of Frankenstein (with Benedict Cumberbatch and Jonny Lee Miller) and I loved it. It is squarely based on Mary Shelley’s original work. In the National Theater Live version, the ending is also at a Polar ice region with the Monster and Doctor Frankenstein, but they leave their final outcomes to the imagination. Almost as if the Doctor will be pursuing the Monster for all time.

This Frankenstein Theme is part of over 60 music tracks I’ve composed but never been released. All of those tracks are now being released on streaming platforms, some under the album: Conrad Askland “The Lost Tracks”.